This document provides a high level overview of how mana is implemented in GoShimmer.

Mana is a reputation system for nodes within the IOTA network.

Reputation is gained by contributing to the network, i.e. creating value transfers. As time passes, part of the earned mana of a node decays to encourage keeping up the good behavior.

Mana is essentially the reputation score of a node in the IOTA network. Mana is calculated locally in each node, as a function that takes value transactions as input and produces the Base Mana Vector as output.

In addition to the mana fields, a timestamp field is also added to the transactions that will be utilized for calculating decay and effective mana.

From the pledged mana of a transaction, a node can calculate locally the Base Mana Vector for both Access Mana and Consensus Mana.

It is important to note, that consuming a new transaction and pledging its mana happens when the transaction is confirmed on the node. At the same time, entries of the nodes whose mana is being modified during pledging in the Base Mana Vector(s) are updated with respect to time. In general, updates due to time happen whenever a node's mana is being accessed. Except for the aforementioned case, this could be for example a mana related query from an external module (FPC, Autopeering, DRNG, Rate Control, tools, etc.).

Following figure summarizes how Access Mana and Consensus Mana is derived from a transaction: 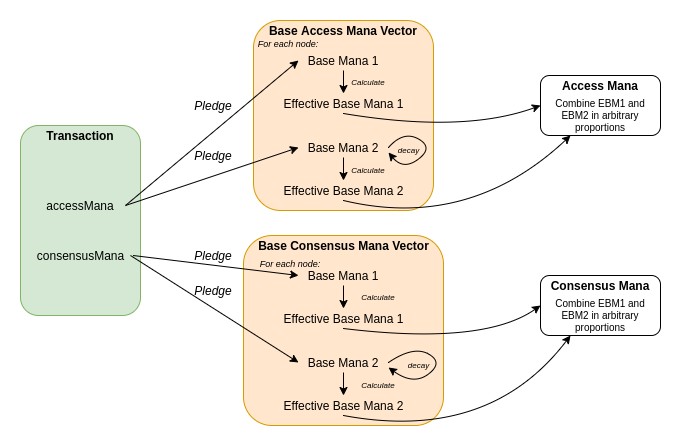 The reason for having two separate Base Mana Vectors is the fact, that accessMana and consensusMana can be pledged to different nodes.

The exact mathematical formulas, and their respective parameters will be determined later.

Since mana is awarded to nodes submitting value transfers, the tangle is needed as input for mana calculation. Each node calculates mana locally, therefore, it is essential to determine when to consider transactions in the tangle "final enough" (so that they will not be orphaned).

When a transaction is confirmed, it is a sufficient indicator that it will not be orphaned. However, in current GoShimmer implementation, confirmation is not yet a properly defined concept. This issue will be addressed in a separate module.

A new field should be added to Transaction denoting PledgedNodeID for Access Mana and Consensus Mana. This is also beneficial to implement mana donation feature, that is, to donate the mana of a certain transaction to an arbitrary node.

The first implementation of mana in GoShimmer will:

In this section, detailed GoShimmer implementation design considerations will be outlined about the mana module. In short, changes can be classified into 3 categories:

As described above, 3 new fields will be added to the transaction layout:

By adding these fields to the signed transaction, valuetransfers/packages/transaction should be modified.

This way node owners can decide who their transactions are pledging mana to. It could be only their node, or they could provide mana pledging as a service. They could delegate access mana to others, but hold own to consensus mana, or the other way around.

Until this functionality is implemented, mana calculation solely relies on transactions getting confirmed. That is, when a node joins the network and starts gathering messages and transactions from peers, it builds its own ledger state through solidification process. Essentially, the node requests all messages down to the genesis from the current tips of its neighbors. Once the genesis is found, messages are solidified bottom up. For the value tangle, this means that for each solidified and liked transaction, TransactionConfirmed event is triggered, updating the base mana vectors.

In case of a large database, initial synching and solidification is a computationally heavy task due to the sheer amount of messages in the tangle. Mana calculation only adds to this burden. It will be determined through testing if additional "weight lifting" mechanism is needed (for example delaying mana calculation).

In the GoShimmer test network, all funds are initially held by the faucet node, therefore all mana present at bootstrap belong to this node. Whenever a transaction is requested from the faucet, it pledges mana to the requesting node, helping other nodes to increase their mana.

The functionality of the mana module should be implemented in a mana package. Then, a mana plugin can use the package structs and methods to connect the dots, for example execute BookMana when TransactionConfirmed event is triggered in the value tangle.

BaseMana is a struct that holds the different mana values for a given node. Note that except for Base Mana 1 calculation, we need the time when BaseMana values were updated, so we store it in the struct:

BaseManaVector is a data structure that maps nodeIDs to BaseMana. It also has a Type that denotes the type of mana this vector deals with (Access, Consensus, etc.).

BaseManaVector should have the following methods:

BaseMana should have the following methods:

There are two cases when the values within Base Mana Vector are updated:

For simplicity, we only describe mana calculation for one of the Base Mana Vectors, namely, the Base Access Mana Vector.

First, a TransactionConfirmed event is triggered, therefore BaseManaVector.BookMana(transaction) is executed:

Base Mana 1 is being revoked from the nodes that pledged mana for inputs that the current transaction consumes. Then, the appropriate node is located in Base Mana Vector, and mana is pledged to its BaseMana. Events are essential to study what happens within the module from the outside.

Note, that revokeBaseMana1 accesses the mana entry of the nodes within Base Mana Vector, therefore all values are updated with respect to t. Notice the two branches after the condition. When Base Mana values had been updated before the transaction's timestamp, a regular update is carried out. However, if t is older, than the transaction timestamp, an update in the "past" is carried out and values are updated up to LastUpdated.

The same regular and past update scheme is applied to pledging mana too:

Notice, that in case of EMA_coeff_2 = decay, a simplified formula can be used to calculate EffectiveBaseMana2. The same approach is applied in updateEBM2().

Any module accesses the Base Mana Vector

In this case, the accessed entries within Base Mana Vector are updated via the method:

The mana package should have the following events:

The mana plugin is responsible for:

The proposed mana plugin should keep track of the different mana values of nodes and handle calculation updates. Mana values are mapped to nodeIDs and stored in a map data structure. The vector also stores information on what Type of mana it handles.

Access Mana and Consensus Mana should have their own respective BaseManaVector.

In the future, it should be possible to combine Effective Base Mana 1 and Effective Base Mana 2 from a BaseManaVector in arbitrary proportions to arrive at a final mana value that other modules use. The mana package has these methods in place. Additionally, a parameter could be passed to the getMana type of exposed functions to set the proportions.

The mana plugin should expose utility functions to other modules:

Such utility functions could be used for example to visualize mana distribution in node dashboard, or send neighbor mana data to the analysis server for further processing.

Mana is booked when a transaction is confirmed.

The mana plugin is responsible to determine when to start calculating mana locally. Since mana state is an extension to ledger state, it can only depict realistic mana values once the node is in sync. During syncing, ledger state is constructed from messages coming from neighbors as described further above.

In this first iteration, mana plugin relies on TransactionConfirmed event of the value transfers plugin, and has no explicit rules on when to start and stop mana calculation.

In future, initial mana state (together with the initial ledger state) will be derived from a snapshot file.

In this section, all tools and utility functions for mana will be outlined.

To study the mana module, following metrics could be gathered:

Each node calculates mana locally, not only for themselves, but for all nodes in the network that it knows. As a result, mana perception of nodes may not be exactly the same at all times (due to network delay, processing capabilities), but should converge to the same state. A big question for visualization is which node's viewpoint to base mana visualization on?

There are two ways to visualize mana in GoShimmer:

While Local Dashboard gives flexibility in what and how to visualize, Grafana Dashboard is better at storing historic data but can only visualize time series. Therefore, both of these ways will be utilized, depending on which suits the best.

Additionally, the GoShimmer Analyzer (analysis server) could be updated: